Topping headlines this month: a global trifecta of rising prices, the Russia-Ukraine war, and the ongoing impact of a pandemic. With all eyes on inflation, the Fed on Wednesday raised interest rates by one-quarter of a percentage point for the first time in three years.

The first of six anticipated rate increases means there will be less borrowing, and with less purchase power, consumer spending is predicted to dip. Any dramatic decreases in consumer spending could affect demand for truckload freight in future quarters. Meanwhile, the Fed is tasked with tapering inflation without kicking off a recession. Fun times.

Then there are oil prices. In his hit song, ‘All I Do Is Win,’ DJ Khaled might have said it best, “…And they stay there, up, down, up, down, up, down.” Except these aren’t hands in the air, and no one feels like they’re winning right now. Even when oil prices drop, you won’t see immediate relief at the pumps.

A quote worth quoting: “(Fuel) prices can go up like a rocket and come down like a feather.” --Tom Kloza, global head of energy analysis at the Oil Price Information Analysis, which tracks gasoline prices for AAA.

The AAA daily national average for gasoline was hovering around $4.29 per gallon as of publishing. Gas Buddy showed us a California station serving up fuel at $6.79 per gallon. That’ll put a damper on Spring Break plans! Studies show that the average US household will spend $2000 more on gas this year (in addition to the $3000 they were already spending). Time to charge those electric scooters, folks!

Meanwhile, higher diesel prices continue to be an ongoing burden for smaller trucking companies already struggling against driver shortages and extensive regulations. Diesel has jumped to a record high of more than $5 per gallon. Truck drivers resoundingly agree that if prices stay this way, it will put a lot of small transport companies out of business.

Read on for a high-level recap of what's happening in the freight markets.

While we’re seeing improved carrier capacity and a general easing in supply chain issues, both volatility and rates remain elevated. 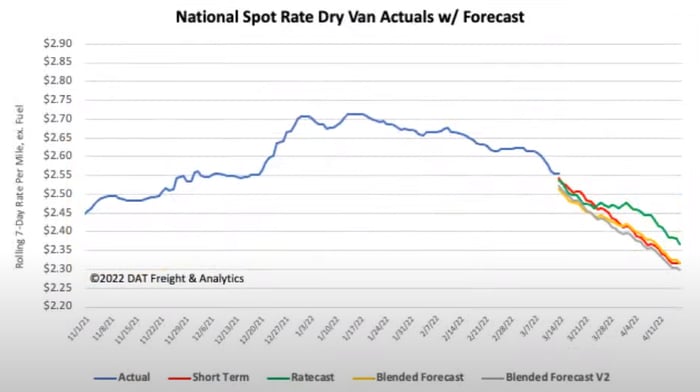 Dry van rates are expected to drop over the next month. Armstrong estimates that the graph above over-predicts the downward trend, but we expect rates to decrease.

Reefer load volumes have been dropping over the last few weeks, down about 33 percent over the last 30 days. Load posts on DAT are down 16 percent over just the previous week, and carrier postings are up for the fourth week. Reefer freight has been tightening in the eastern US as produce season begins. Depending on the lane, rates have jumped between $0.14 to 0.38 per mile. Capacity is starting to tighten in southern Texas and produce increases in Laredo, TX and McAllen, TX. Expect rates to increase between $0.10 to 0.40 per mile in the South Texas region. On average, reefer rates have dropped by $0.19 per mile in the last month. These rates are $0.28 per mile higher than last year, compared to the previous month when rates were $0.70 per mile higher year-over-year.

There is a considerable amount of divergence for the reefer forecast, likely due to produce season increasing rates in select markets like the Southeast and Texas. We can also expect to see rates in California start to increase next month as produce season begins. The rest of the country will likely continue to experience the downward rate trend we have been seeing.

Flatbed rates are expected to continue their rise over the next month. Armstrong doesn’t anticipate that flatbed rates will drop again until the end of summer, at best.

Import volumes have been down over the last couple of weeks, mostly due to factory shutdowns in China for the Lunar New Year. Those volumes have heavily impacted the western half of the US. Freight into California has become difficult to sell over the last few weeks as freight out of Los Angeles is down over $0.30 per mile. This import lull will soon end as the factories are back in full swing and spring imports are on their way.

Diesel prices are up an average of $0.40 week-over-week and $1.15 over the last two weeks, creating a $2.06 increase year-over-year. The increase translates to about $0.06 per mile week-over-week, $0.18 per mile over the last two weeks, and $0.32 per mile year-over-year, on a national average. Historically, fuel averages around 25 percent of a linehaul, but it is 35 percent right now. This price increase will put pressure on smaller carriers that cannot afford that direct hit to their operating costs.

Some good news: oil futures are finally starting to drop. Fuel prices should level out and hopefully begin to decline (slowly) in about 2 - 3 months. Oil futures are not a direct link to fuel prices, but they signify what might come.

As shown above, base rates have decreased slightly more than fuel has increased, which allowed rates to drop somewhat despite a jump in fuel prices. When fuel costs decrease, brokers will be paying attention to base rates with customers and carriers.

Check back with us monthly to stay up to speed on freight market conditions. Our snapshots compile market data from reputable public sources to help you stay informed.

Subscribe to our blog today and get these updates in your inbox.

Tieler is a pricing analyst with more than 6 years of experience in transportation and logistics. He joined Armstrong in early 2018 as a contracted broker focused on building a strong book of business with shipper customers. Prior to Armstrong, Tieler sold trucking regulations to new carriers.