What will 2023 look like for the freight market and broader economy? Our magic eight ball says, "Answer unclear; ask later." Although inflation rates have been decreasing for the last six months, they’re still much higher than economists (and anyone trying to buy eggs) would like. The latest report, released January 12th, has us at 6.5%, the lowest since October 2021. The Federal Reserve plans to continue raising rates throughout 2023, hoping that the higher rates will create weaker demand (and thus greater supply), which in turn should lead to lower prices trickling down from housing to goods and services.

The good news is that fuel prices and inflation tend to have a direct relationship, as fuel costs affect everything, from home heating prices to transportation costs. As we see fuel prices slowly decrease, we can predict that inflation will continue to do so. In addition to fuel costs, we have our eyes on other factors affecting the freight market, including trucking jobs, the number of new truck orders, government regulations affecting trucking, disruptions caused by infrastructure rebuilds, and the relocation of manufacturing and distribution hubs.

Whatever happens in 2023, we'll keep you posted with our monthly market insights! Hit "Subscribe" at the top of this post and get these updates straight to your inbox. 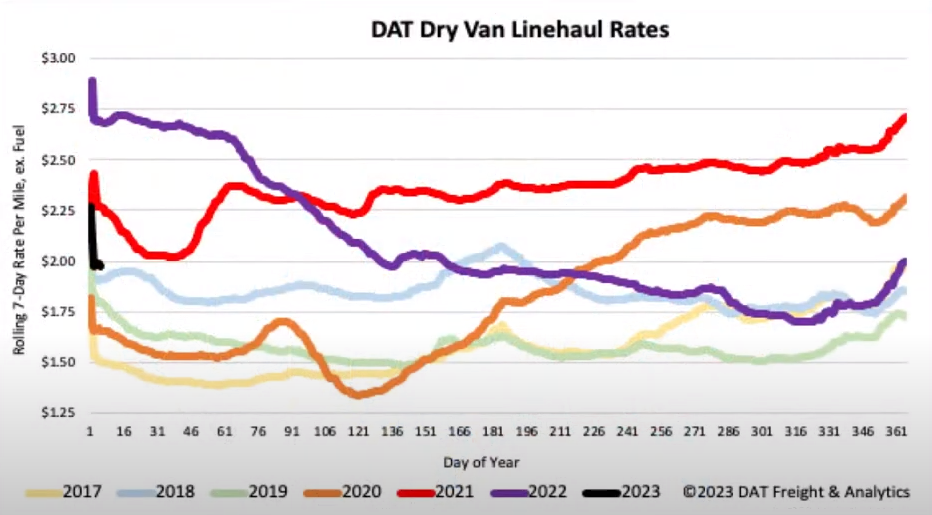 Dry van spot rates saw a slight increase over the past month. Lower capacity over the holiday season caused a quick spike and then a sharp drop. With the holidays behind us, we expect rates to decrease again. Load post volumes are down about 60% compared to this time last year, while equipment postings are at their highest level in seven years. However, dry van truckload volumes are still within 1% of 2021 levels and are holding better than reefer and flatbed. Every market in the U.S. saw a decrease in volume over the last month except for Houston, TX. This is normal as we expect volumes to decrease from Q4 into Q1. On average, dry van spot rates increased $0.20/mile over the last month and are now $0.81/mile lower year-over-year, about a 30% decrease. 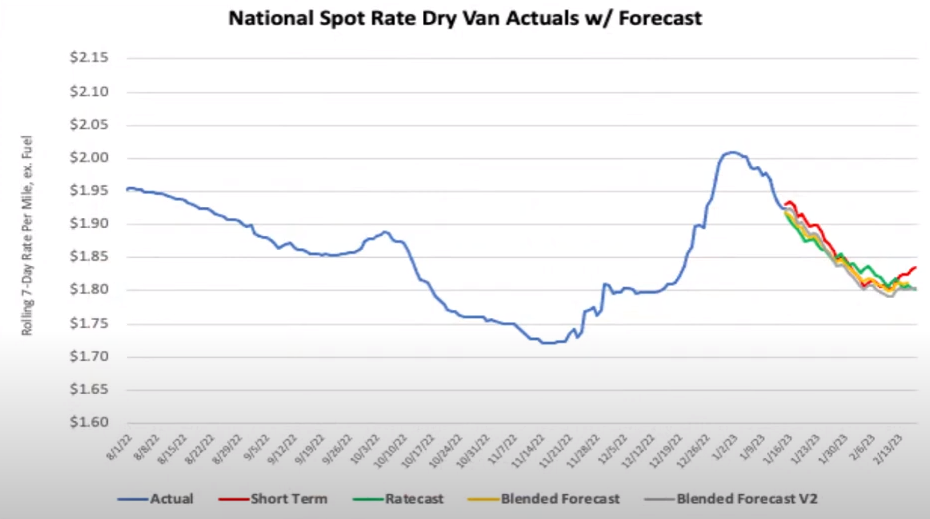 As we predicted last month, rates increased steeply during the holiday push. We expect a typical Q1 decrease and predict rates will return to October and November 2022 levels. With a slight rebound forecasted for mid-February, we do not expect a bigger rebound until closer to the end of February. 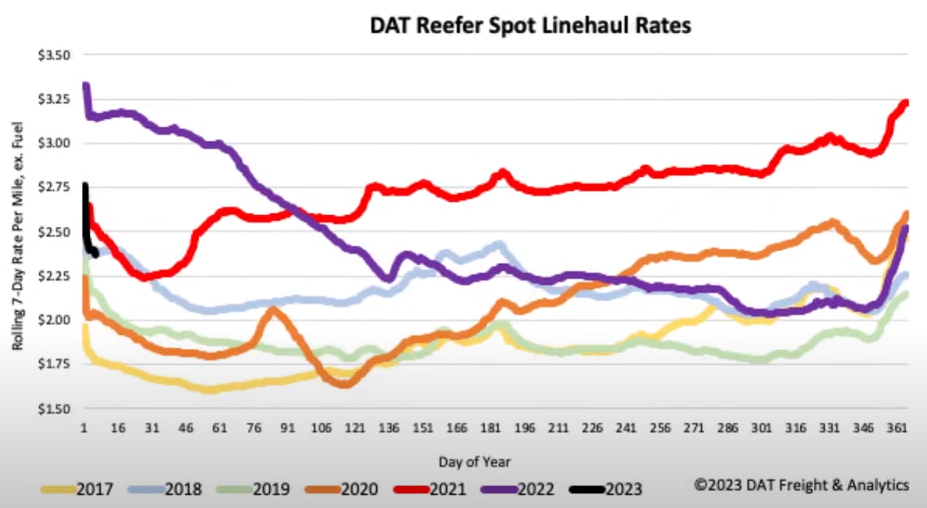 Reefer rates are resuming their downward trend due to low volumes. We saw a typical seasonal spike from the holidays, but reefer rates have declined sharply over the last two weeks. Load posts are down 51% compared to this time last year, while carrier equipment postings are at their highest level in seven years. Reefer truckload volumes are at their lowest levels in the previous seven years. One of the leading causes is that produce volumes remain much lower than historically usual. California reefer truckload volumes are at their lowest since 2010. This is almost a 70% drop in volume levels compared to historical data.

The largest reefer truckload volume growth is at the border of Texas and Mexico. Shortages in produce volume coming out of California are driving up import volumes from Mexico. Volumes are up around 7% year-over-year and are currently at the highest they have been over the last 12 years for January. On average, reefer spot rates decreased $0.10/mile over the previous two weeks and are now $0.94/mile lower year-over-year, about a 30% decrease.

Similar to van rates, as we predicted last month, we saw a steep rate increase linked to the holidays. We expect a typical Q1 decrease and rates to return to similar levels from October and November 2022. The forecast shows a slight rebound in mid-February, but we do not expect a bigger rebound until closer to mid-March, as reefer demand remains weak. 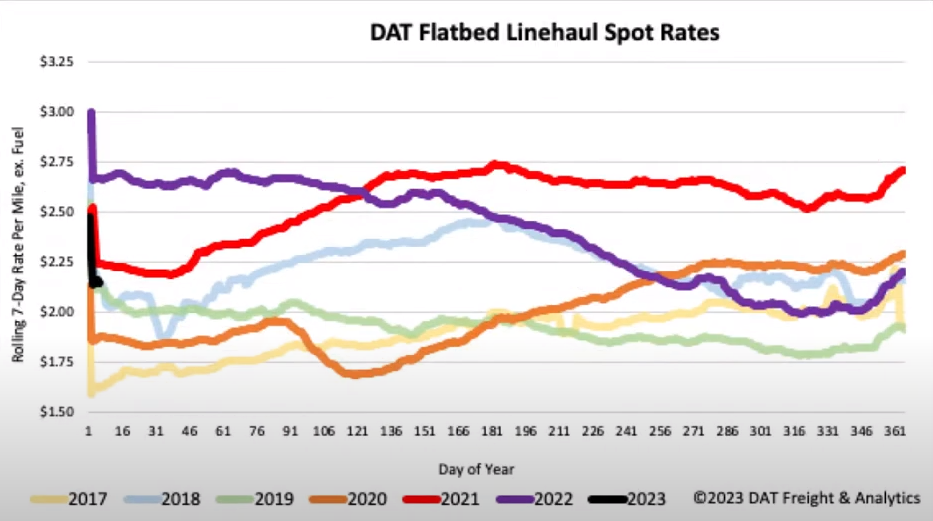 Spot rates had a seasonal holiday spike similar to van and reefer rates. Load post volumes are still down more than 70% compared to this time last year. This is the lowest that flatbed load posts have been since 2016. Equipment postings are at their highest level in the past seven years. Volumes are on the rise, though, with most markets in the U.S. seeing an increase in volume over the last month. Capacity is still readily available, however, and rates remain down. We have seen a rise in flatbed volumes by around 35% over the last week. Linehaul spot rates are up $0.15/mile over the last month, but flatbed spot rates remain $0.60/mile lower year-over-year.

As demand strengthens slightly, the forecast is expected to remain flat. The flatbed market does not have much seasonal pressure at this time of year, so we predict that rates will remain fairly flat until we get closer to spring.

Import volumes had a rough year in 2022, with an estimated deficit of 3.2% compared to 2021. Weakening demand in the U.S. and Covid restrictions in China had the most significant impact on volumes. Looking ahead to 2023, we expect imports to remain weak. Uncertainty in the economy and rising inflation are significant hurdles imports will have to overcome.

Intermodal ended 2022 with a deficit of 4.9% compared to 2021 in the U.S. It was a disappointing year for intermodal considering the strength of the freight market in 2022. The leading causes of the deficit were the threat of the rail unions' strike and poor service.

Diesel prices have continued to trend downward over the last month, dropping an average of $0.21/gallon. An increase in production and a decrease in demand are starting to allow diesel prices to normalize as the U.S. recovers more towards its reserves than expected. While prices continue to drop, keep in mind that prices are still $0.892/gallon higher than this time last year, but it was in February of 2022 when diesel prices started their $2.00/gallon increase.

Do you know someone in the industry who could benefit from a snapshot and analysis of the freight market today? Share this post with them!

Subscribe to our blog today and get these updates in your inbox!